During Collect 2019 in London, Galerie Kuzebauch will showcase four distinctive Czech glass artists and their works in the exhibition Glass Rituals. The choice of designers and their intergenerational dialogue aims to show the diversity with which glassmakers approach their creation. The curatorial selection aims at providing a comprehensive picture of contemporary Czech studio-glass created by what is often labelled as the “fairer sex”. The installation proves that glass made by women is often far more courageous, more experimental and created under very demanding conditions. The exhibition thus attempts to disrupt the perception of Czech glass as a purely male domain. The exhibition Glass Rituals will be a premiere both for the gallery and for all four artists at Collect. It is an opportunity to introduce Czech glass from another – often marginalized point of view and to prove that Czech glassmaking has its rightful and unique place on its world stage. Each of the artists specifically applies different techniques, based on long-standing traditions that transform into their own, authentic artistic testimony. 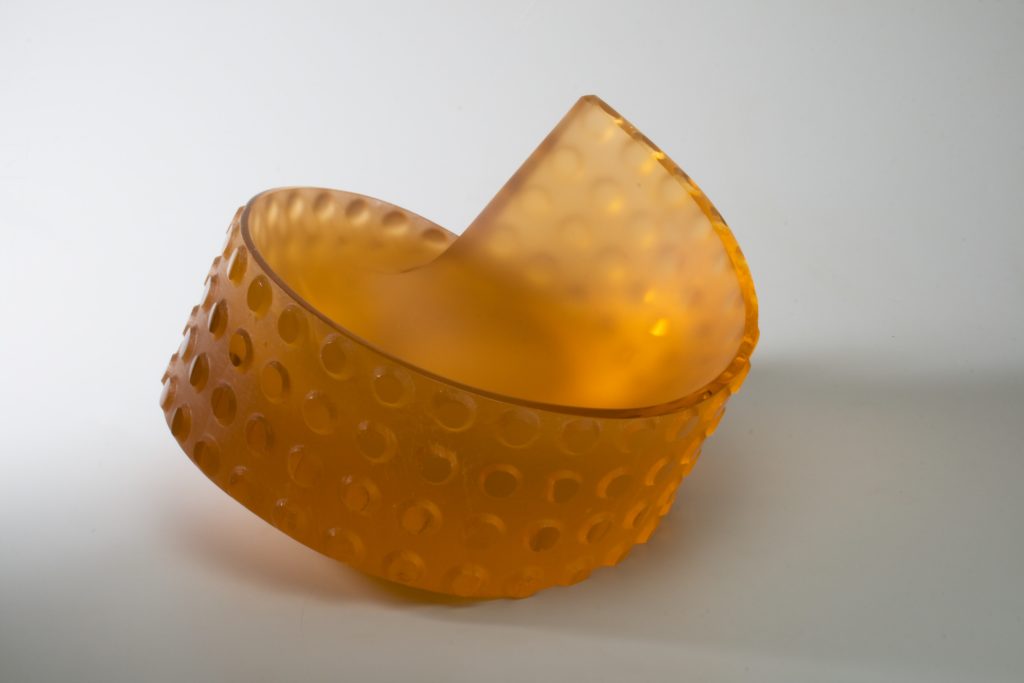 Vladimíra Klumpar is one of the best-known contemporary glass artists from Czech Republic. She gained an international acclaim with her cast glass sculptures that stems from the tradition of one of the greatest figures in the history of Czech glass: Stanislav Libenský. She is the recipient of a prestigious Pollock-Krasner Foundation Grant and the Massachusetts Artist Foundation Fellowship. Her long-term stays in Mexico and United States influenced her style and her artistic expression: “My relationship to colour changed over the course of my visits to Mexico, where there is no escaping it. Colours literally surround you everywhere. Even during the dry season, when the land is draped in earth tones, the colours of doors and window frames, entire houses or the flowering bougainvilleas stand out as never before. Until then, some colour combinations had been simply unthinkable for me,” says Klumpar. Her works were exhibited in galleries all over the world, and are included in the collections of The Corning Museum of Glass, the American Arts and Craft Museum in New York and many others. Her cast glass sculptures are inspired by either rigid geometric or biomorphic shapes. In her work light and the depth of space play crucial role:

“For a cast glass sculpture, it isn’t just colour that is important, but also its depth and the extent to which it allows you to see into negative space. I have to admit that every new colour of glass and its behaviour are a great unknown. It is difficult to predict a colour’s extremes at various thicknesses and I have ruined more than one piece because of faulty assumptions. In addition, every colour evokes a different feeling – from joyful or pure to dark and mysterious.”

Lada Semecká tells stories through unique properties of given materials and their origin. She has worked with glass, ceramics, sandstone, basalt, porcelain or paper. She studied glassmaking and engraving at the Secondary School of Glassmaking in Kamenický Šenov and later used her expertise when working as an engraver at the Carlsbad´s Moser factory. She continued studying at the Institute of Art and Culture JEPU in Ústí nad Labem and later graduated at the Academy of Arts, Architecture and Design in Prague under prof. Vladimír Kopecký. She attended many different glass symposia and travelled abroad as an artist in residence. The other prestigious schools where she studied were in Riga and St. Petersburg and later in the USA, where she attended the Pilchuck Glass School. She also taught at AAAD in Prague before being invited to teach in Toyama City Institute of Glass Art, currently she teaches at the Faculty of Art and Design J. E. Purkyně University in Ústí nad Labem. Sylva Petrová in her book Czech Glass explain Semecká’s inspiration and influence on her creative process: “It may seem that her introverted, emotional minimalistic aesthetic has been inspired by Japan, where she taught at the famous Toyama Institute of Glass Art. However, Semecká’s artistic expression has issued from her emotional depth, penetrating into her work both in linear engravings on hollow glass and in carved compositions. Her “glass pictures” show nebulae, clouds and rippling symbolic cluster of natural elements. She developed her own technology of devitrifying and crystalizing glass particles by fusing. Her interest does not primarily lie in colour, but in play with texture and the relationship between controlled effects and random elements. These emotionally charged works correspond to the cultural influence of Japan, the country she deeply admires and where she happily returns.” She explores the quiet nature of glass and her fused glass hangings series “Flow” evoke fluidity and imagination. When working with basalt stone, she emphasizes its unique surface, resilience and resonance.

“I used to work with black glass and basalt is somewhat similar to that, it is an extrusive igneous rock with a vertical columnar separation, common throughout the Solar System. Compared to sandstone, basalt is strong, durable and nonporous. However, it can be also brittle, especially after remelting. Moreover, it is local, from mountains in Czech Republic close to my home,” explains Semecká and continues: “I experimented with casting melted basalt into metal mould and that is how “Universe” was created. The rainbow on the surface of black matter is a trace of seemingly random chemical thermal processes at the time of processing. Thought of coincidence, which is perhaps the proof of existence of a higher order in the universe.” 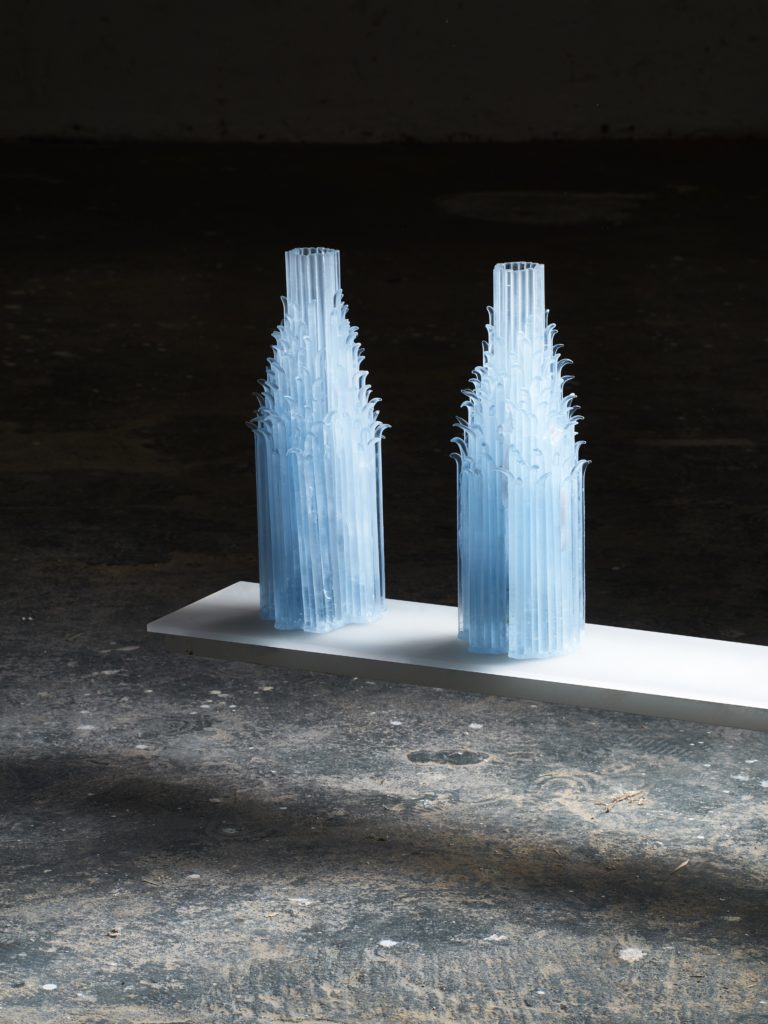 Klára Horáčková experiments with glass and transforms it into delicate forms. She uses her art to put forward a vision of evolution – biomorphic and almost otherworldly objects from fused glass, resembling basalt surfaces and rock formations, grand glass installations interacting with public space and interiors. “She is one of the most prominent creative personalities of her generation,” says Sylva Petrová, well-known glass curator and professor. Horáčková is a visual artist and designer, who creates all her artwork in her studio in Prague, Czech Republic. She had earned her MgA. degree at Academy of Art, Architecture and Design in Prague at 2006 after studying at Glass Studio under the lead of prof. Vladimír Kopecký, and Sculpture Studio with prof. Jiří Beránek. Within her own art practice she often expresses the ideas through the material of glass and its diverse forms and techniques but doesn´t limit herself solely to this medium. Her works vary from smaller sculptural objects and design to dimensional conceptual mobile installations or projects with new media. In her own words, she has found “great fascination with many things, especially science and the principles of our existence. In her understanding, nature, the world, society, culture, and thinking are systems. Consequently, art is a way of making some of this clearly visible.” 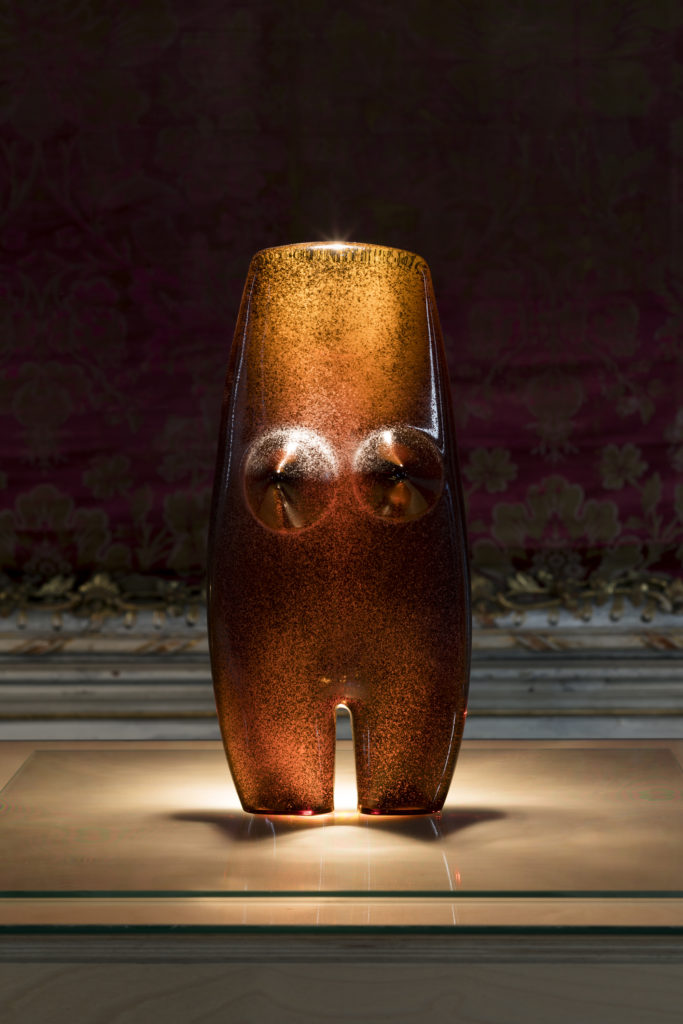 Eva Eisler is an internationally recognized sculptor, furniture, product and jewellery designer. Rooted in constructivist theory, her structurally based objects project a unique spirituality by nature of their investment with “sacred geometry.” The body of her work includes architectural installations, public spaces and exhibition designs. Eisler is also a respected curator and educator. She heads the award-winning K.O.V. (concept-object-meaning) studio at Prague’s Academy of Arts, Architecture and Design. Eisler’s work is represented in some of the world’s most prestigious museum collections, such as the Brooklyn Museum of Art, Cooper-Hewitt National Design Museum, Metropolitan Museum of Art and Museum of Arts & Design in New York, Smithsonian Institution – Renwick Gallery in Washington, Museum of Fine Arts – in Montreal, in Boston, in Houston or the Pinakothek der Moderne in Munich, among others. Eva Eisler’s recent work is a manifestation of an intersection of the past and future. Together with glass sculptor Martin Janecký, she has created silhouettes from solid metallurgical glass referring to the archetypal image of goddess. The imagery stems from ancient rituals and fertility symbols: “The unconscious of modern humans retains the ability to form symbols that once found their expression in the religious imaginations and rituals of primitive people. This ability still plays a role that is psychologically immensely important. To a much greater extent than we realize, we are dependent on the statements that are given to us by such symbols, and how our attitudes are deeply influenced by them.”

C. G. Jung Galerie Kuzebauch was established in 2012 in Prague. The gallery focuses on the presentation of exceptional examples of studio artwork made by both young as well as established artists, designers and craftsmen, it attempts to break the rules on how we perceive art, design and craft today. Hundreds of small glass workshops across the Czech Republic enable those creators to experiment with various glass materials and techniques in a hands-on environment. The gallery facilitates those creators to gain recognition across disciplines and continents, with contemporary art glass playing the main role. Among its most established artists are Vladimír Kopecký, Martin Janecký, Vladimíra Klumpar or Petr Stanický.

The curator of the exhibition is PhDr. Petr Nový, who has been cooperating with Galerie Kuzebauch for many years. Petr Nový is the chief curator of the Museum of Glass and Jewelery in Jablonec nad Nisou, member of the Academy of Czech Design and Editor-in-chief of Glass & Ceramics magazine. He lectures and writes on the history and development of glass and imitation jewellery both in Czech Republic and abroad.

Collect London organized by Crafts Council is one of the most prominent shows of applied art, with over thirty galleries and 400 artists selected each year by an independent expert committee.

This project was implemented with the financial support of the Ministry of Culture Czech Republic: