For the third time,  Galerie Kuzebauch will make an appearance at Révélations fair in Paris, this time with its exhibition Sculpting in Glass. The idea behind the curator’s pick – four artists born between 1970 and 1980 – is to draw attention to the current trends in glassmaking towards experimentation and challenging the boundaries.

Martin Janecký, Anna Polanská, Josef Divín and Ondřej Strnadel have one thing in common – their approach to glass primarily involves sculpting their material of choice. In their artwork, they exhibit precision and a refined sense for the material in which they sculpt their pure emotions, personal memories, as well as the tranquillity of nature. The variety displayed in their approach and technique is a result of their striving for artistic freedom and experimentation, both of which allow them to find new ways of creating often striking artistic creations.

Martin Janecký (born 1980) stands out as one of the most prominent Czech glass artists. He comes from a family of glassmakers and was literally raised with glass. He became famous when he mastered a technique called “inside sculpting” – the shaping of a steaming hot glass bulb from the inside. Janecký mastered this technique under the careful eye of its creator William Morris and became an acclaimed expert in this area. Janecký’s realistic glass sculptures preserve emotions and artistic expression which are as hot and burning as the material they were made from. Martin Janecký’s unique glass art techniques continue to command attention. In an interview with Material Times, the glass artist admitted that he often finds himself proverbially skating on thin ice: “I’ve been blowing glass since I was thirteen – meaning for twenty-one years now. I’ve tried working in all manner of facilities and using all manner of glassblowing techniques. The techniques are demanding, and require constant attention to a variety of parameters such as thickness, temperature, etc…  I try to create realistic pieces, but the learning process in an ongoing one. Every day, I try to increase my understanding of the material. Even though it may appear that I know what I am doing, often that really is not the case…”

Martin Janecký’s work at the Révélations 2019 exhibition can also be seen as part of the prestigious “Crafting Europe” event, organised by the World Craft Council Europe, and featuring select fine crafts. 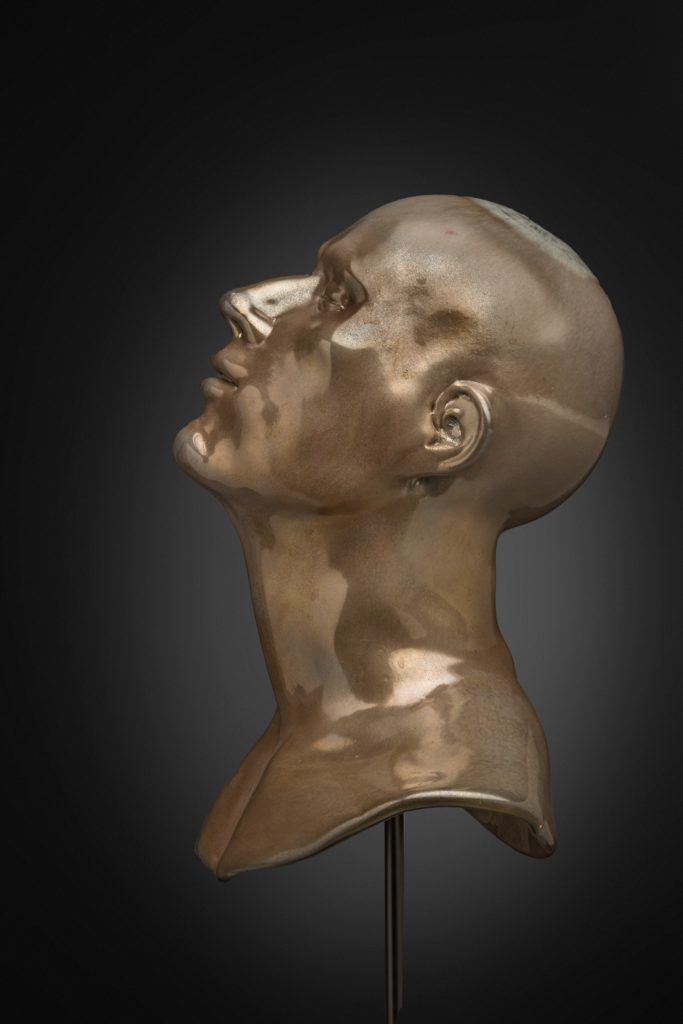 Exhibited next to Janecký’s rather expressive artwork is the work of two other artists who tend to hide their emotions under the surface and carve them into the bends and curves of their glasswork. In her set of fused-glass vases, Anna Polanská (born 1973) evokes the structure of honeycombs and points out the contrast between nature and its randomness on one side, and the precision of the industrial world on the other. Polanská graduated from Kurt Gebauer’s and Marián Karel’s studio at UMPRUM in Prague. Currently, she heads the department of cut glass at the famous glassmaking school in Železný brod. On the one hand, her shapes launch an introspective probe into the artist’s inner world and, on the other, they literally bear the prints of nature which led the author’s hand. Glass artist Anna Polanská views her work as a kind of Theatrum Mundi (Great Theatre of the World).

“In an effort to generate the depictions I want, I create various material relationships, combining individual representations – sometimes abstract, sometimes featuring specific forms,” explained Polanská in an interview with Material Times. The artist often also deliberately adds small stories into her works, which observers must decipher in a manner similar to readers of a book. The result is that Polanská’s works are ultimately more open and accessible to observers than other more abstract works. “I try to express certain impressions and core ideas, and if observers grasp these and they evoke similar sentiments in them, then I consider that a success,” adds Polanská.

In contrast to the massive cast-glass vases, Josef Divín (born in 1982) presents lightweight to etheric objects which also draw on nature. Inspiration from the landscape is obvious from the maps created from melted silver foil attached to the surface of the fragile vases. The image of the warped landscape is further reinforced by the cut necks of the vases. In his glasswork, Divín, who studied at Vladimír Kopecký’s studio, contrasts the intriguingly wild nature of the glass mass with the tranquillity of nature which gives his objects their final shape. Josef Divín now teaches Glass Design at the glassmaking school in Valašské Meziříčí and at Prague’s UMPRUM.

In the book České sklo (Czech Glass), author Sylva Petrová describes glass artist Josef Divín’s  work thus: “Divín’s ostensible subject matters, such as landscapes or architecture, merely represent the surface reality of his works. Rather, the true building blocs of his works are Divín’s personal experiences, sensitivities, and exploration of the ‘landscape of emotions’,  presented not via ostentatious gestures, but via refined subtlety. On the surface, the artist’s works radiate the qualities of a painter, with strong references to the traditions of lyrical abstraction or abstract expressionism.” 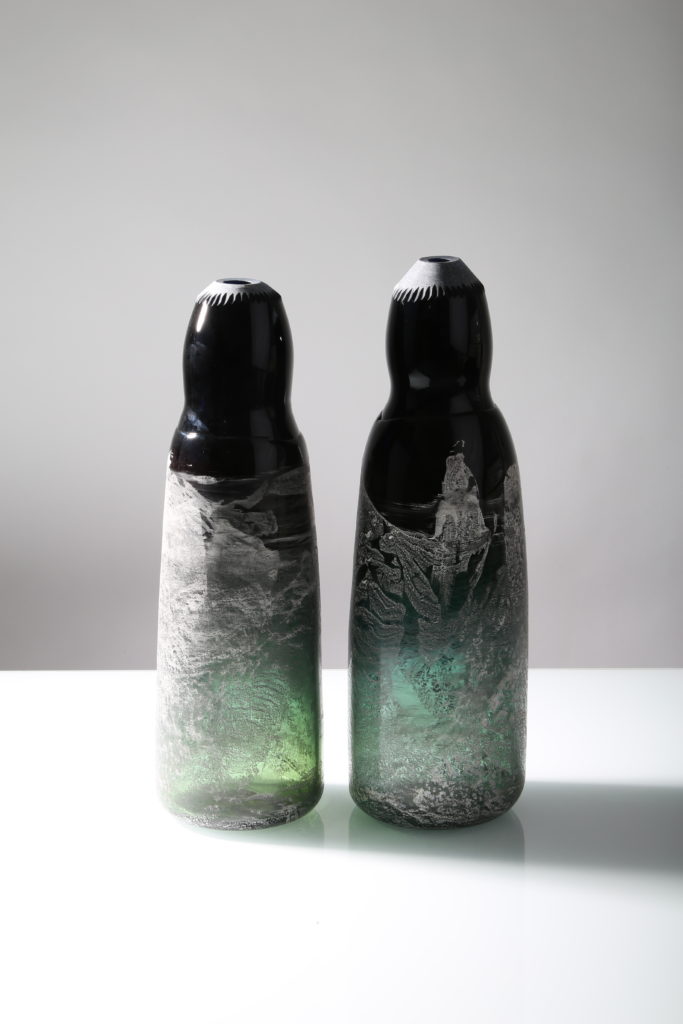 Ondřej Strnadel (born in 1979) is the fourth artist presented by the Kuzebauch Gallery to French art lovers. Strnadel studied industrial design at Pavel Škarek’s studio at the Tomáš Baťa University in Zlín, and he now teaches at the glassmaking school in Valašské Meziříčí. Unlike the artwork of the other three glassmakers on exhibition, his hand-blown objects are purely abstract. Ondřej Strnadel uses intriguing asymmetrical interventions in his geometrically pure and aesthetic objects to create the illusion of motion and fluidity in the final artwork. In his new glass series, Strnadel, who was awarded the Bavarian State Prize in 2018, strives to reach a difficult result to make squarish shape, thus challenging the boundaries of the glass matter.

Describing the works of Ondřej Strnadel, author Sylva Petrová writes: “In terms of freehand shaped molten glass – a technique hitherto less common in the world of Czech art glass –   Strnadel has managed to develop an individual language of artistic expression. It is a language both original and at the same time archetypal, reflecting hundreds of years of human crafts, that concentrates on rounded, soft and organic shapes.” 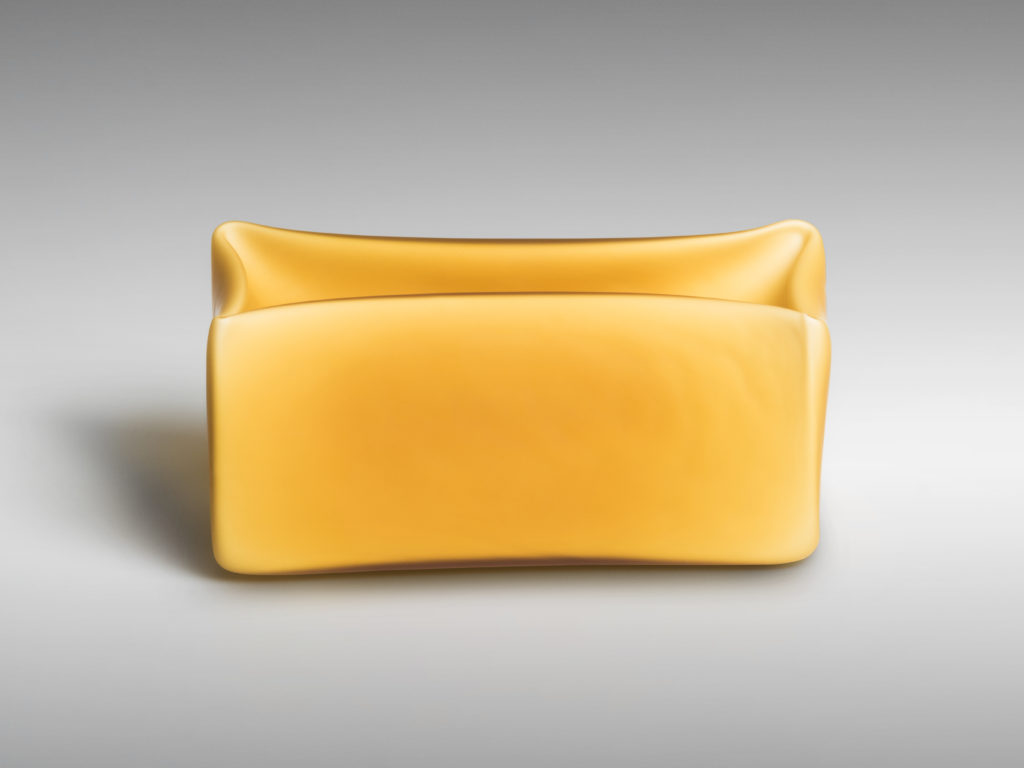 Petr Nový, curator of the Sculpting in Glass exhibition and also curator of the Kuzebauch Gallery, commented on his selection of artists as follows: “Czech art glass has changed dramatically over the last twenty years. I get a sense of the striking and omnipresent desire to experiment, not only in terms of art but also technology. It’s hard to name a glassmaking process that Czech artists would fail to apply and appreciate. Czech glassmakers have opened their universe to the world, sought inspiration there and inspired others. This approach is typical, especially for the generation born between 1970 and 1980. These artists grew up under socialism but had to fight for their place under the sun in the newly-born democracy. I reckon this is the root of their outstanding creativity, courage, and ambition built on the profound feeling that creative freedom is not a matter of course and must be appreciated and carefully defended. In short, Generation 40, as we like to call it, has evolution in their genes and has introduced highly beneficial innovative thoughts into Czech art glass.”

About Kuzebauch Gallery –The Kuzebauch Gallery opened in 2012 in Prague. It  focuses on the presentation of exceptional examples of studio artefacts by both young and established designers and artists. The gallery helps them gain recognition across various artistic disciplines, materials and continents. In the past five years, its main focus has been on contemporary art glass.   Over one hundred small glassworks and glass shops in the Czech Republic have enabled artists to experiment and promote various glassmaking techniques, thus giving rise to outstanding and exceptional artefacts. The centuries-long Czech glassmaking tradition is built on history, white sand, and skilful glassmakers, as well as their love of glass and knowledge and expertise which has been inherited across generations.

Partners of the exhibition:

The project was realised with the kind support of the Ministry of Culture Czech Republic: