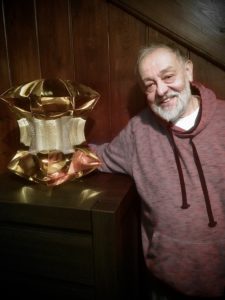 As a dexterous and inventive cutter of glass, Klein has developed his own method for decorating custom-made optical glass works, cutting surfaces with the aid of a video-assisted hand tool.  Despite working with glass for more than half a century, Vladimir Klein hasn’t come close to recycling past ideas. Rather, his insatiable appetite for creation flows as powerfully as the Danube through the artist’s birthplace back in 1950, namely the Slovak town of Komárno. Indeed, perhaps the clear water, rugged riverbed, and irregular riverbanks dotted with grass and reeds have served as a subconscious inspiration for Klein’s glass art creations.